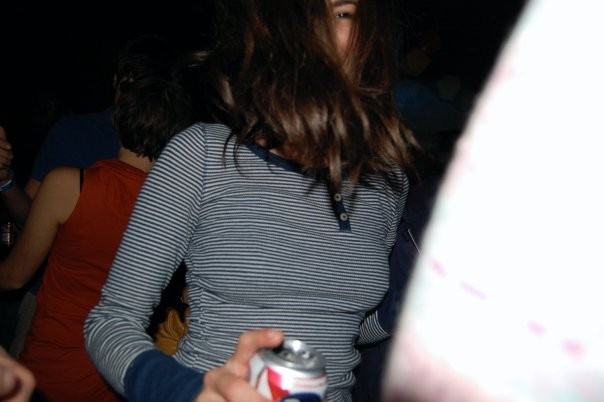 There was a time in college when Trey and I had just started dating again when this guy in my environmental science class invited me to a party he was throwing at his house. “Nah, it’s not like that“, I told Jess, my best friend over coffee that morning. “He’s just a friend“. Later that night I rode my bike to Trey’s and found him sitting around with a bunch of his friends watching bmx videos. My friend had made me this dress from leftover fabric she found in the design hall at school. I paired it with awful chunky Doc Marten boots. “Want to come?”, I asked him. “Theme parties aren’t really my thing”, he told me with his eyes on the television. Trey’s always been like that, laid back. Doesn’t do anything he doesn’t want to do. He’s never been the type to follow my every move.

So I went and danced with a bunch of new people until we were all sweaty and feeling good. Around 4 in the morning when the kegs were up, I dug my bike out of the pile in the front yard and started to ride home. I looked down to see my tire was flat. “Hey! Where are you going?”, my new friends called from the deck. The guy from my class came over to me. “You could just stay here”, he said with eyes that said a lot more, his fingers lightly grazing my arm. I sat on the curb outside and texted Steven, Trey’s room mate and my good friend, figuring if anyone was up, it would be him. No answer. “F*ck it”, I thought, wheeling my bike down the street ready to walk it home. A few minutes later headlights came from behind me. The sound of his old volkswagen rattling up next to me. I knew it was him before looking. He hung his head out the car window, pulling up beside me. “You know, you really shouldn’t be walking in the dark at this time of night, someone with bad intentions might try to pick you up”. One of the guys from the house threw a rock at Trey’s car, angry that their friend’s mating conquests had been thwarted. They started to chase his car down. Trey got out to confront them. “Hey, get f*cked!”, he yelled. “Lets just go”, I told him. “Sorry…”, I said quietly from the passenger’s seat as we drove away. “Don’t be”, he said calmly.

“What are you, my hero? Look I just had a flat”, I said oddly defensive after a few minutes, abruptly breaking the silence. I’ve never been that girl who needed some guy to ride up on a white stallion for her. We listened to The Smiths as he drove me home to the bottom floor apartment I shared with a girl who painted her room black and spelled her name with a K even though you knew it was a C on her birth certificate. “Hey…thanks. You really didn’t have to do that”, I told him, looking more like a train wreck than potential girlfriend material. He leaned in and kissed me. Then he was gone.