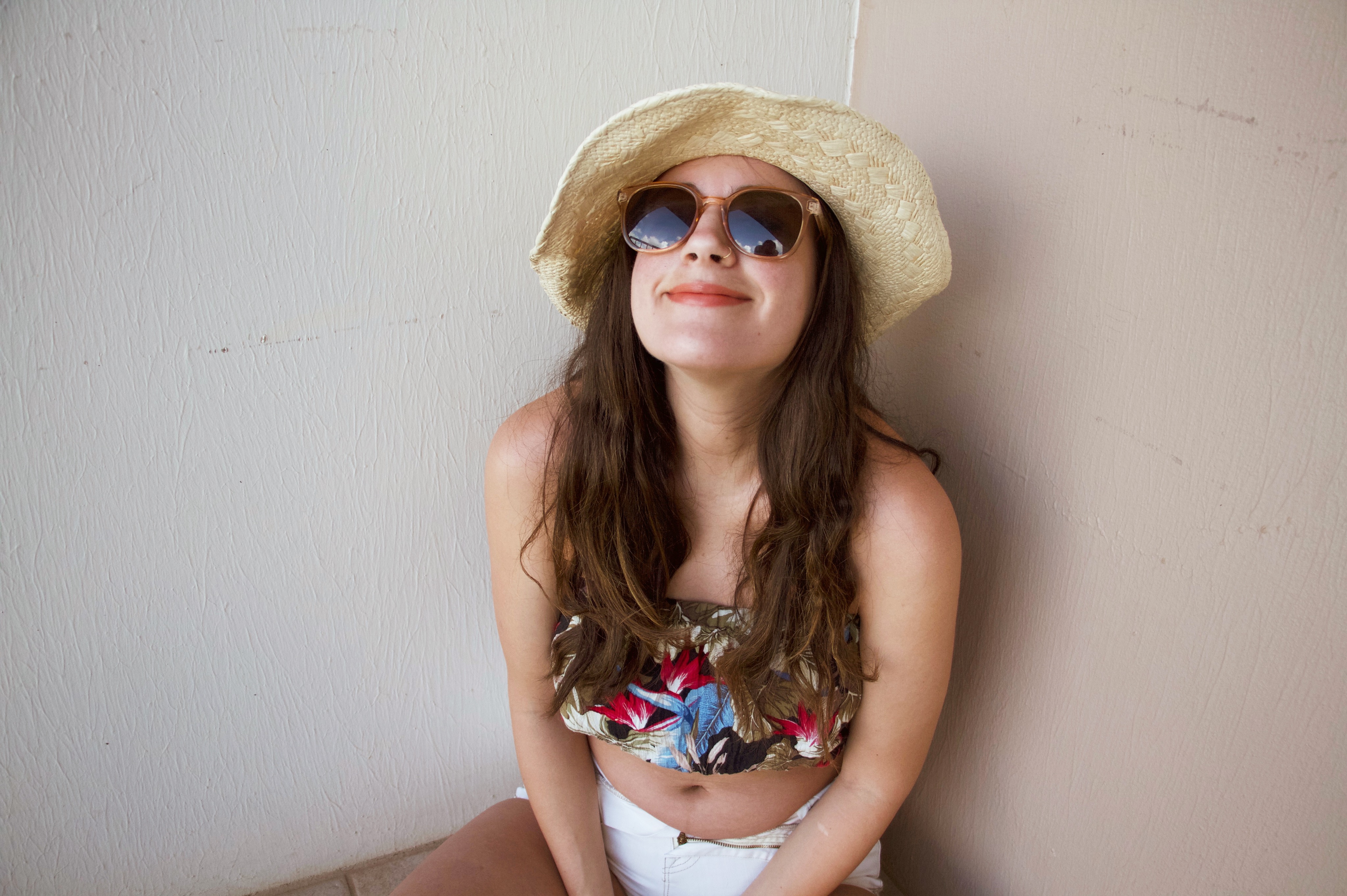 There are times in life for exploration. Times to sleep on trains and climb mountains, times to discover new cultures and develop yourself and how you view the world. And then there are times to lay idly by the pool listening to the lapping waves of an ocean nearby while drinking an overly sweetened virgin pina colada and occasionally leaning over to spark conversation with the old couple next to you about their two vizlas because one of their shirts says “I love dogs, it’s people who annoy me“.

The latter was what we chose to do for our “babymoon” in Kauai. Mila cat is drooling all over my arm as I write this by the way, so I’m assuming that’s her way of saying “hello internet world” to you all. She would like you to know we left her alone, without head scratches, for 5 days (although our friends did check in on her and we spoke to her through the nest cam).

We flew into Kauai on a Thursday. Earlier in the week we had went in for the anatomy screen ultrasound that told us the gender of the little human. So it was exciting and sweet to finally know and have a name to put to this small creature currently kicking my insides. We checked into the resort and promptly ordered two drinks before going and hanging out by the pool. Intermittently we’d decide to interrupt our sun lounging to submerge ourselves in one of the pool’s fountains or waterfalls like a couple kids.

The resort was really pretty, with gorgeous plumeria trees all around and a private beach. A big change from the places we usually stay at off the beaten path. I pointed out the pink plumerias in one of the trees to Trey while walking to our room, and later in the week when he came back with pizza delivery for dinner one night (my hero) because my ankles turned into cankles from too much fun, he handed me one of the pretty flowers he had picked.

The next day we picked up our rental, a red mustang convertible (they were all out of jeeps) and drove up the east side of the island. Kauai is “the garden isle” of Hawaii, and it really is just beautiful. I love how lush and mountainous it is. Along the way we stopped off for a green smoothie at Harvest Market, a natural foods grocery store with a smoothie machine in the back, and a farmer’s market where we got a fresh coconut before heading up to Tunnels beach on the northern part of the island. There we swam in the waves and spotted sea turtles and picked up shells on the beach. 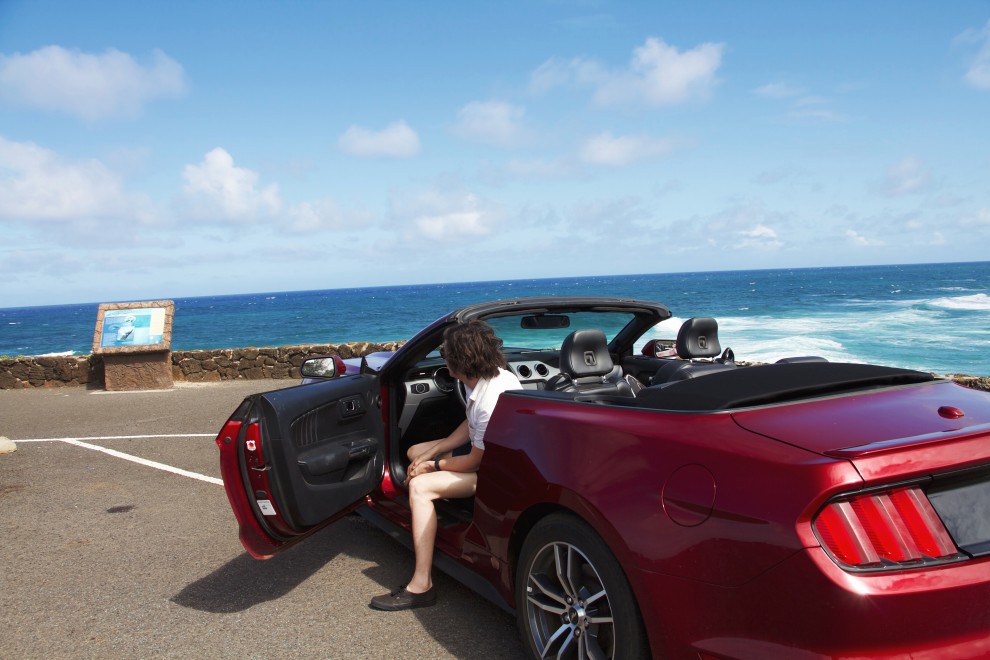 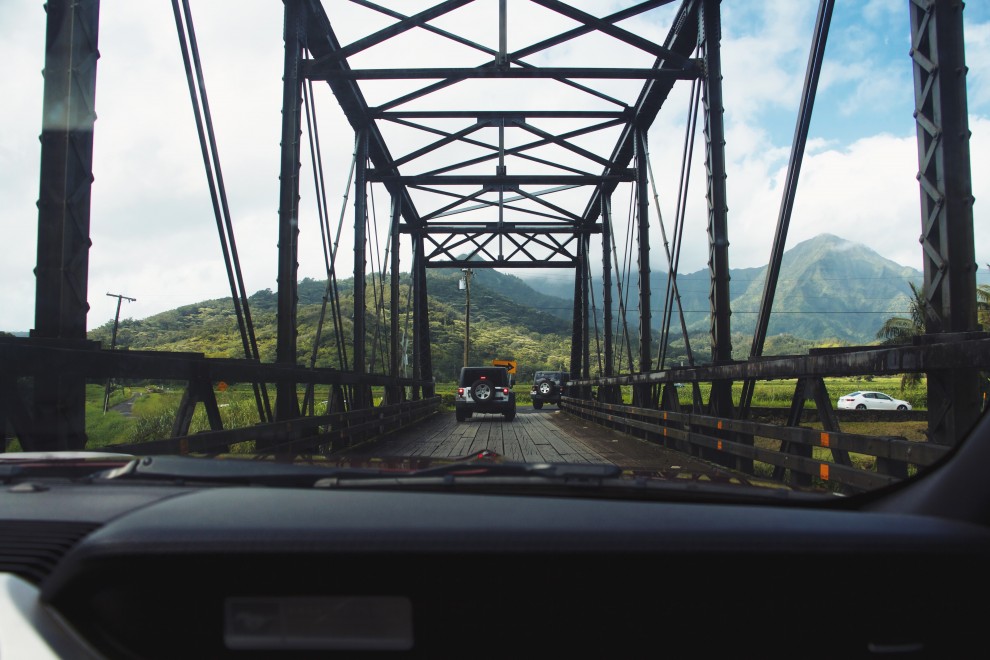 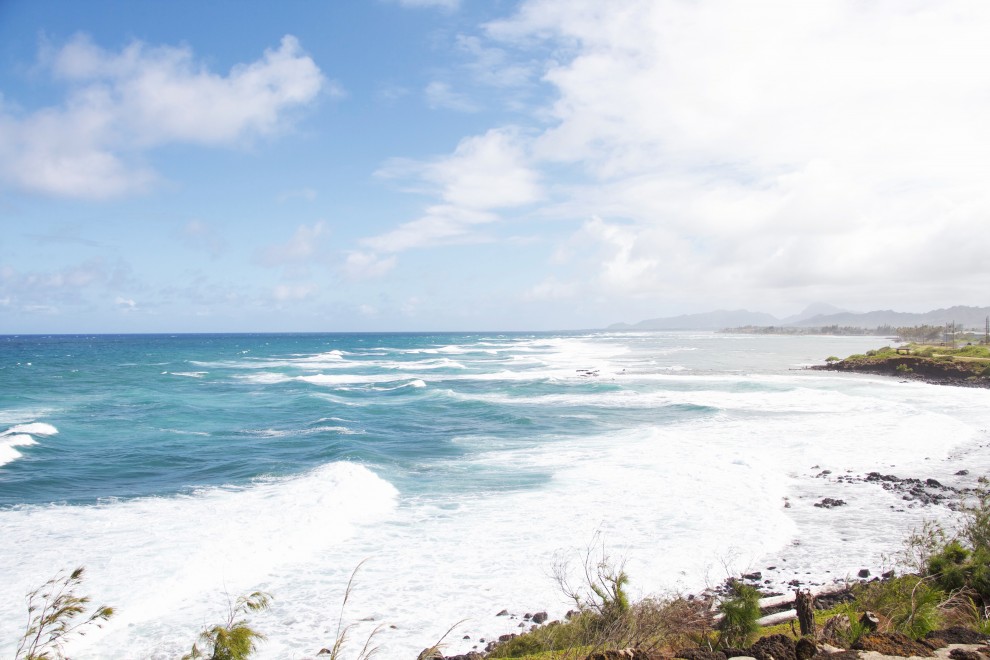 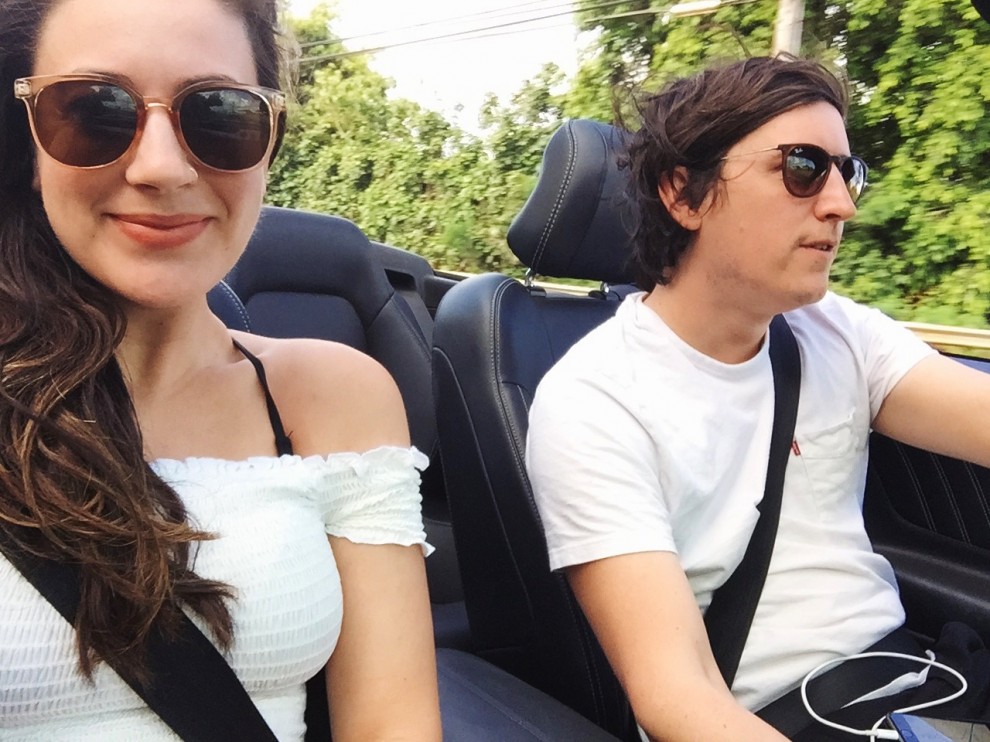 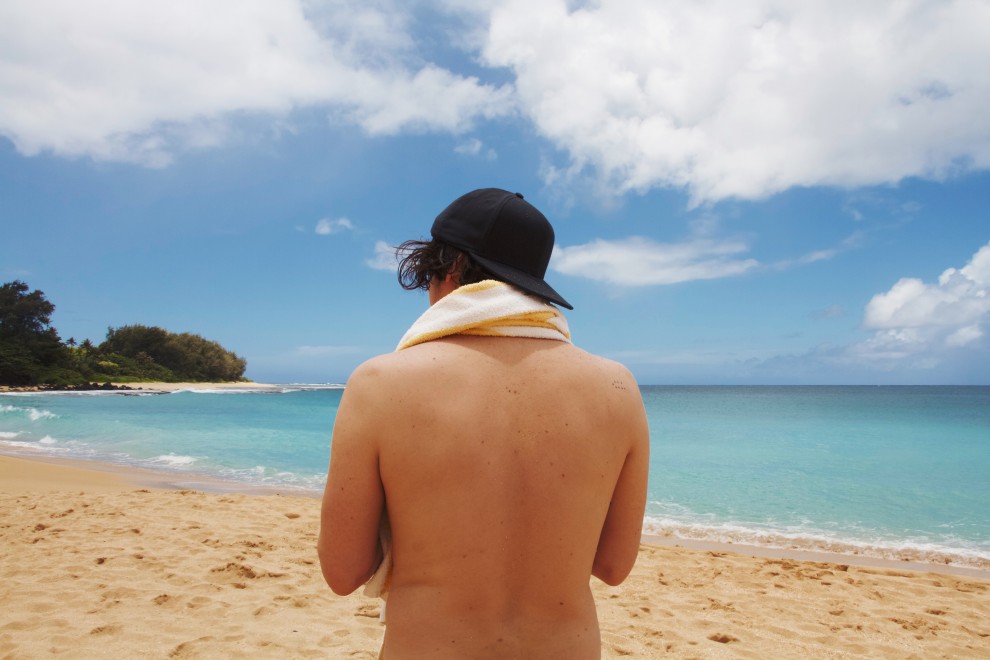 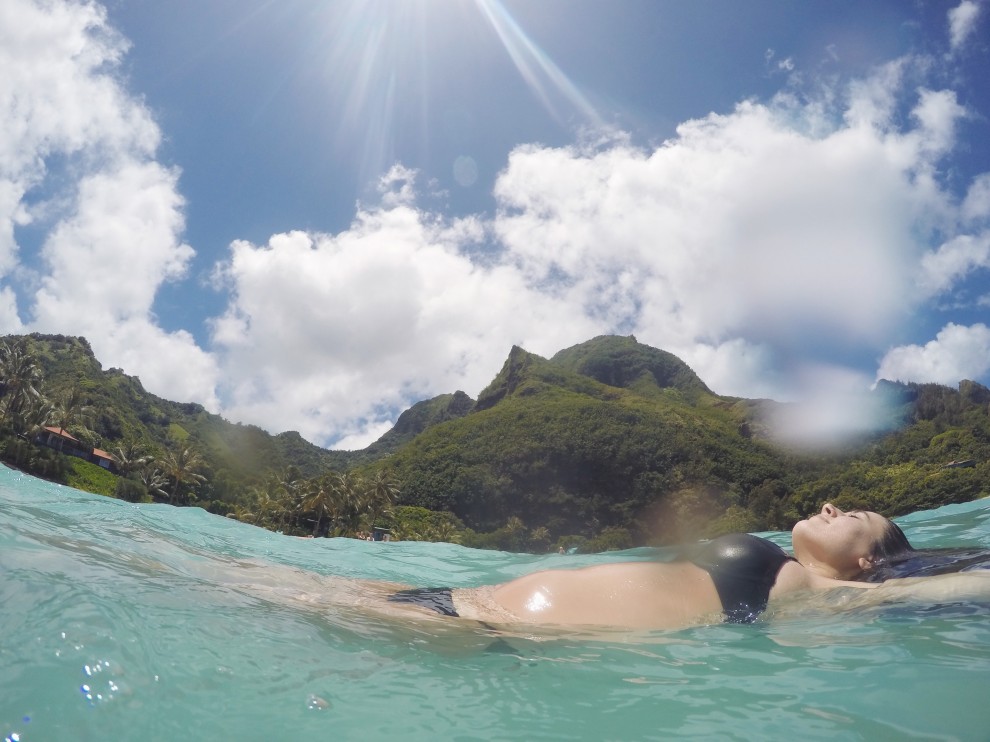 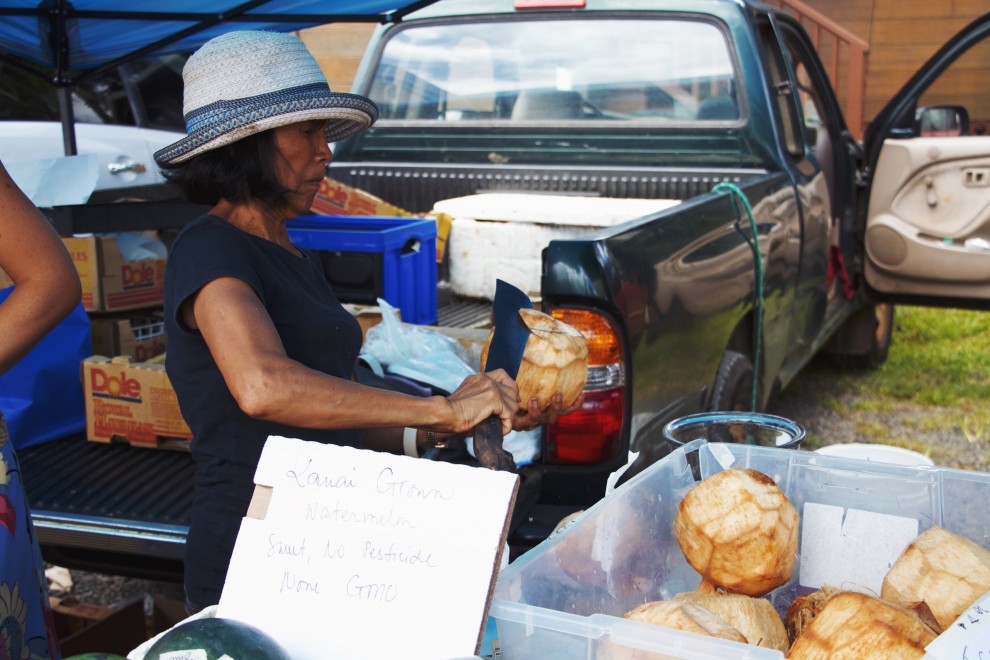 A couple hours later we got back in the car and drove in search of some lunch. We found some fish tacos and cute shops in the town of Hanalei. Then we got some shaved ice at The Wishing Well (a favorite on the island because of the homemade organic syrups, according to locals…it was so so good) and continued on our way. 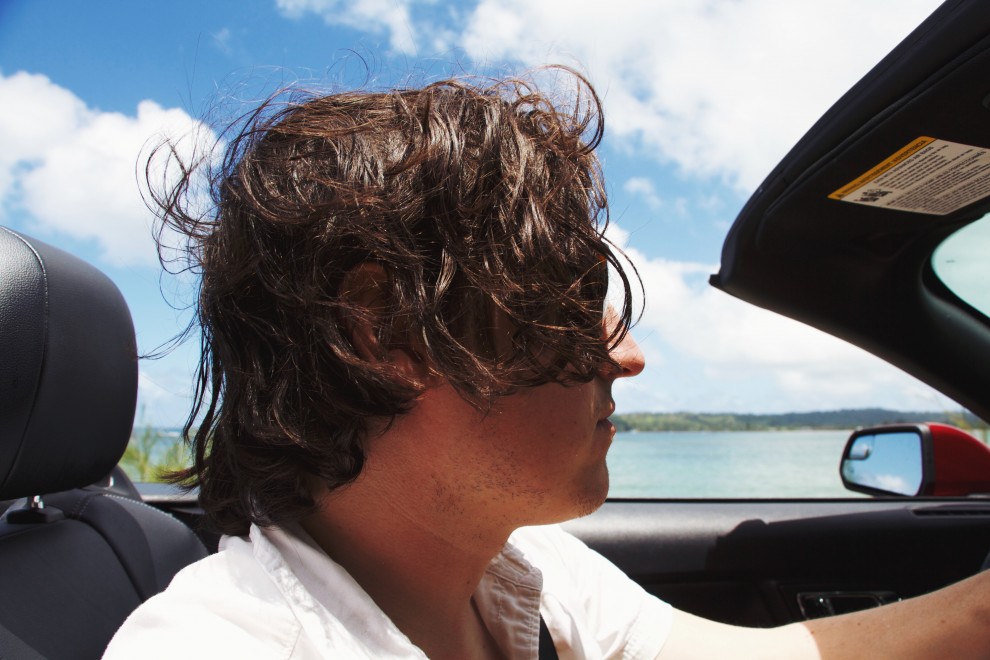 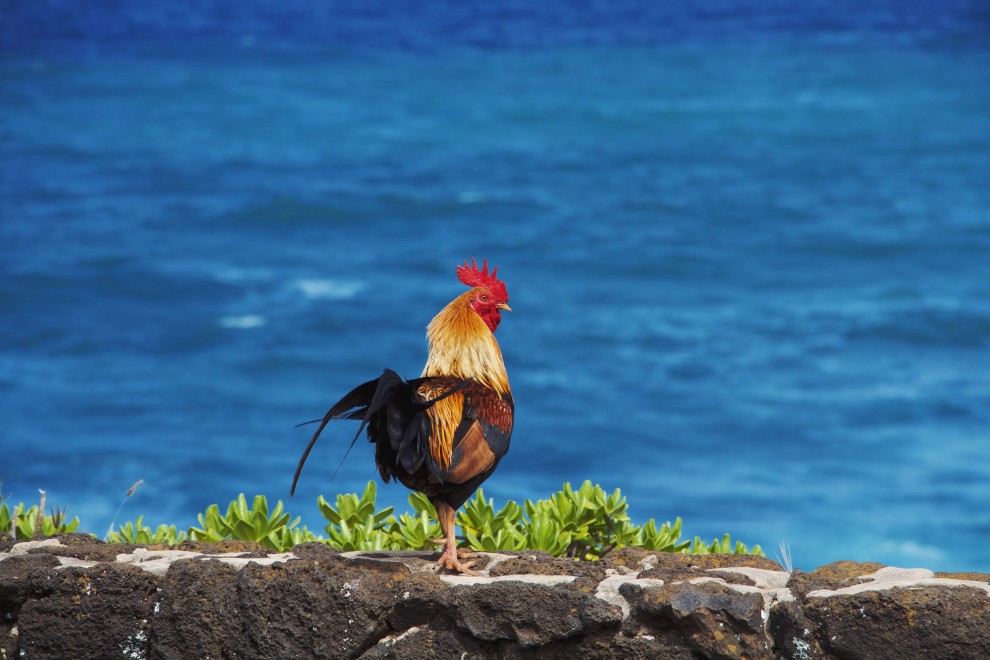 Our last stop of the day was Waimea Canyon, the “Grand Canyon of the Pacific”…or, that’s what our waitress told us the night before anyway. It was beautiful. The colors of the hills and rock, combined with a rainbow that spread across the sky really capped off the end of an awesome day. 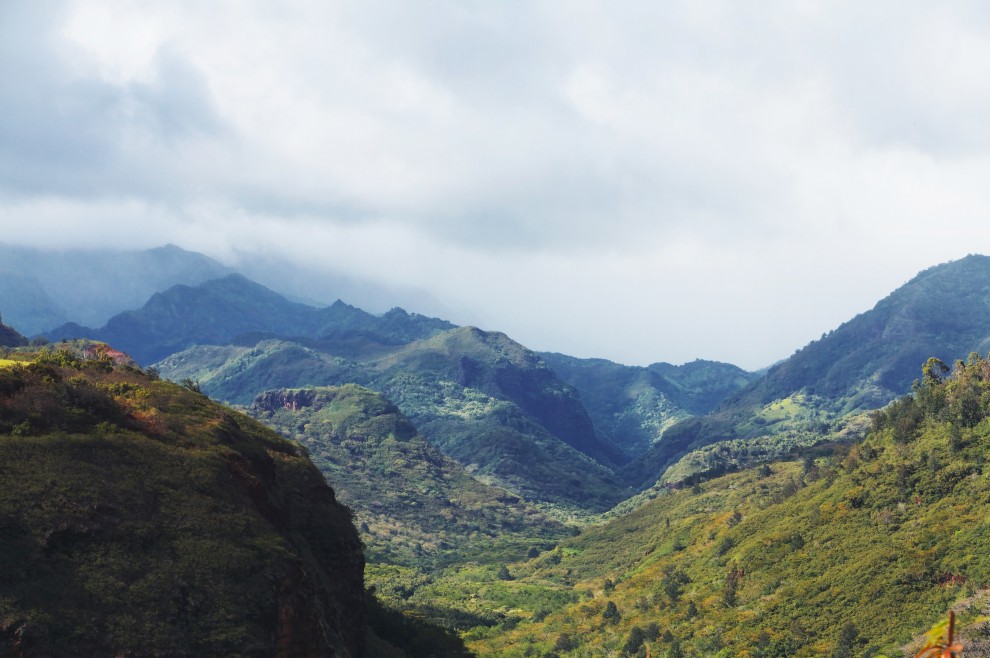 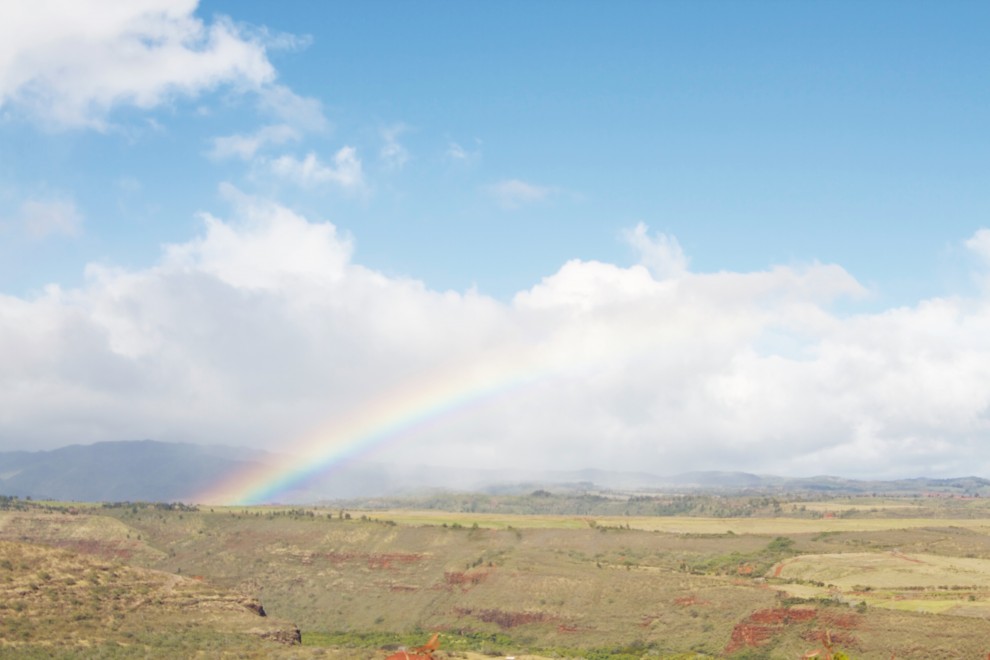 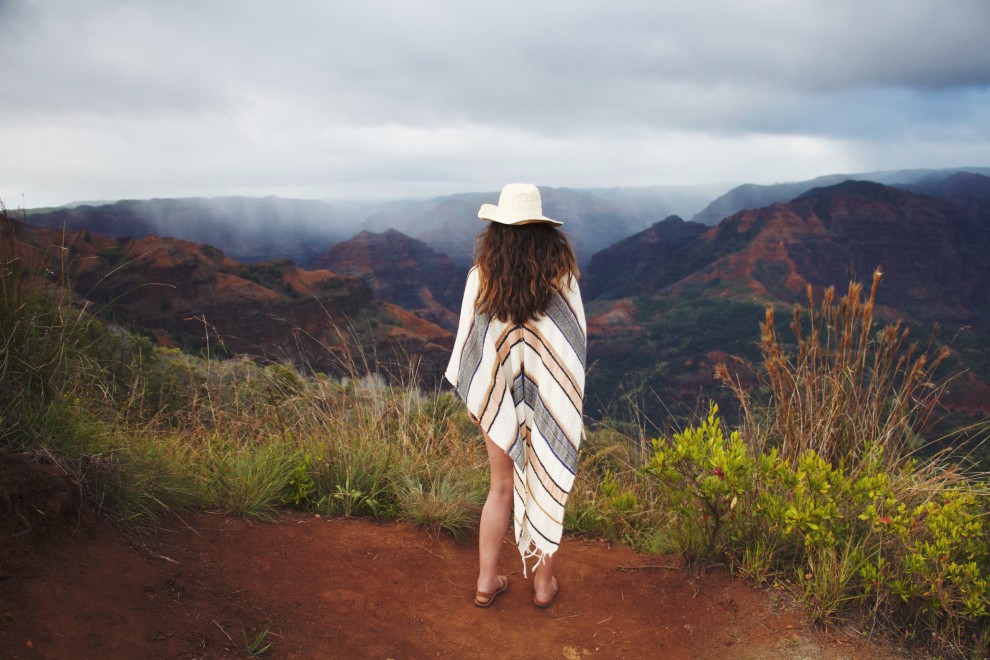 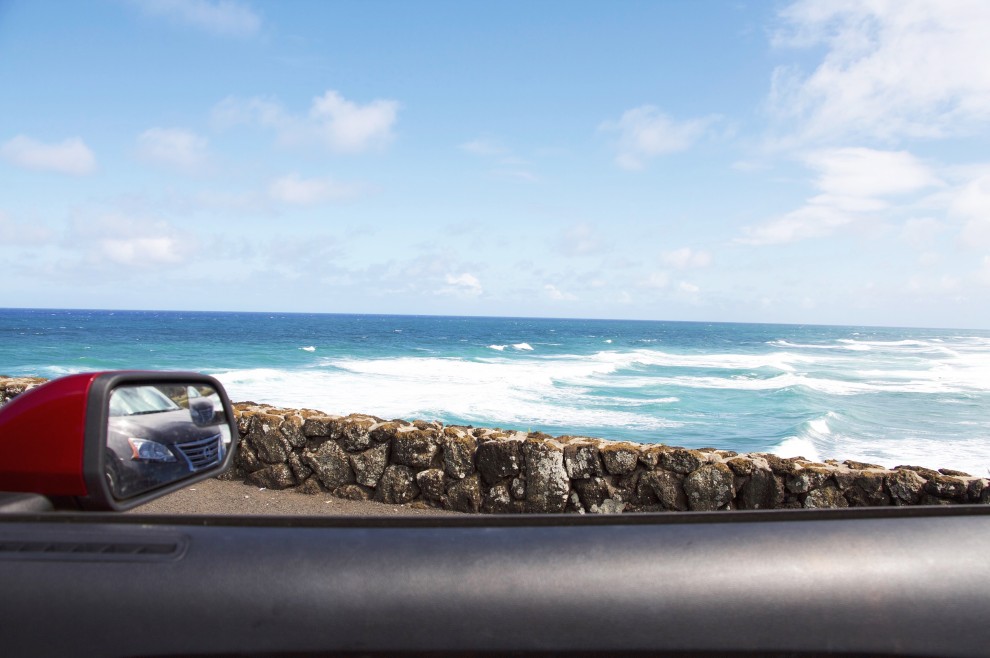 Well, that and some burnouts in the mustang.

“Babe, can you stand over there for a min?” (points to edge of parking lot). I go stand “over there”. “Back up a little further!” he waved. I did. Then Trey proceeded to do burn outs in the parking lot. I wasn’t invited on this endeavor on account of having more than just two fish tacos and a snow cone in my belly. Later he told me we needed a new car (true, our mazda is part of the 10 year club now) with more horsepower when we get home because going faster is “actually a safety feature” for getting out of harm’s way quicker. Pffft.

We got back to our room to discover our friends from home had had a beautiful bouquet of local flowers and banana bread, macadamia cookies and fruit delivered to our room, which was the best surprise (I had no idea anyone knew where we were staying!). So sweet of them. 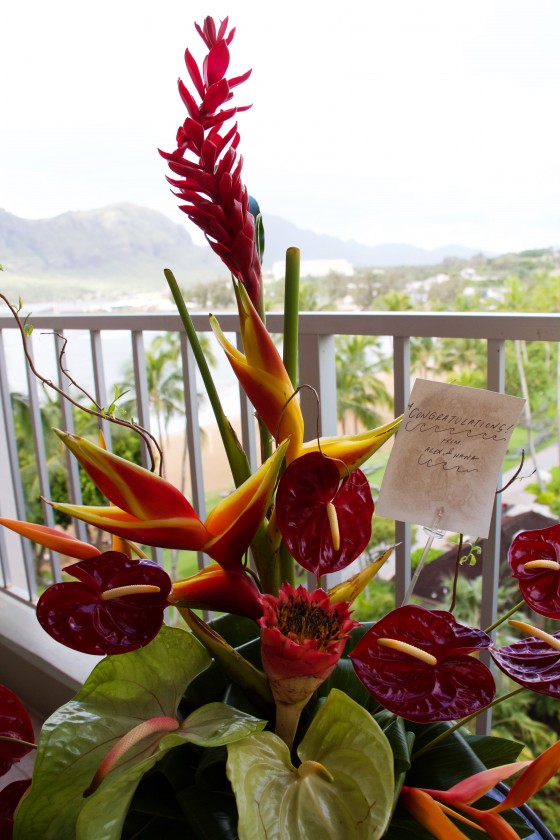 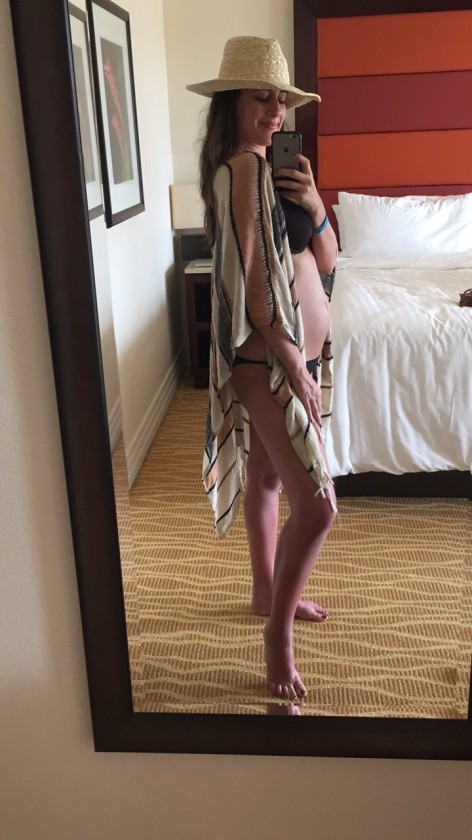 The rest of our time in Kauai was spent swimming in the waves at the beach right off the resort, drinking different fruity concoctions, eating nachos, and just being blissed out happy. 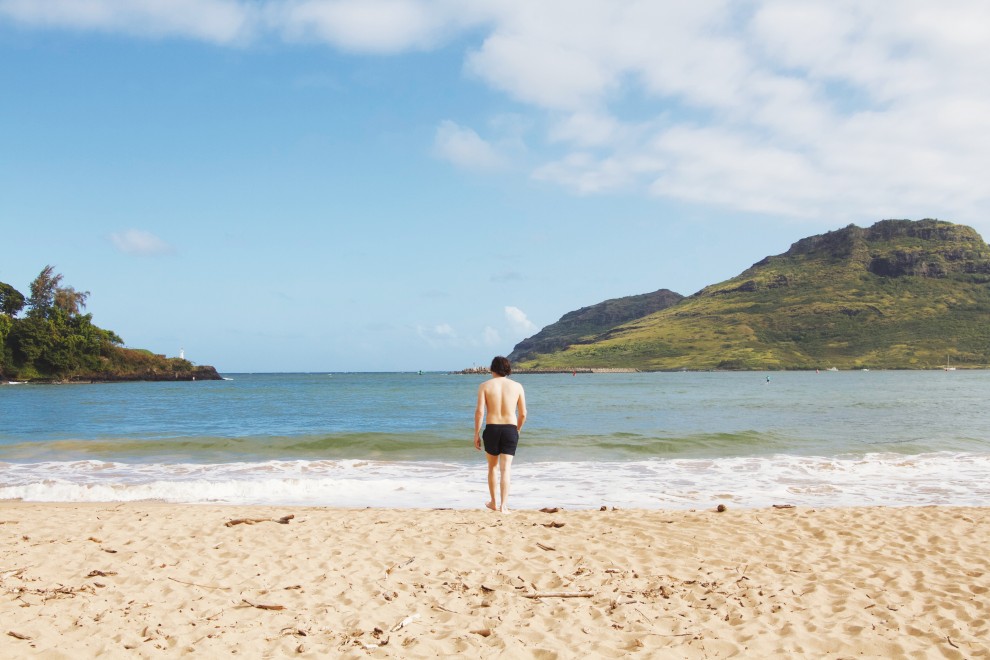 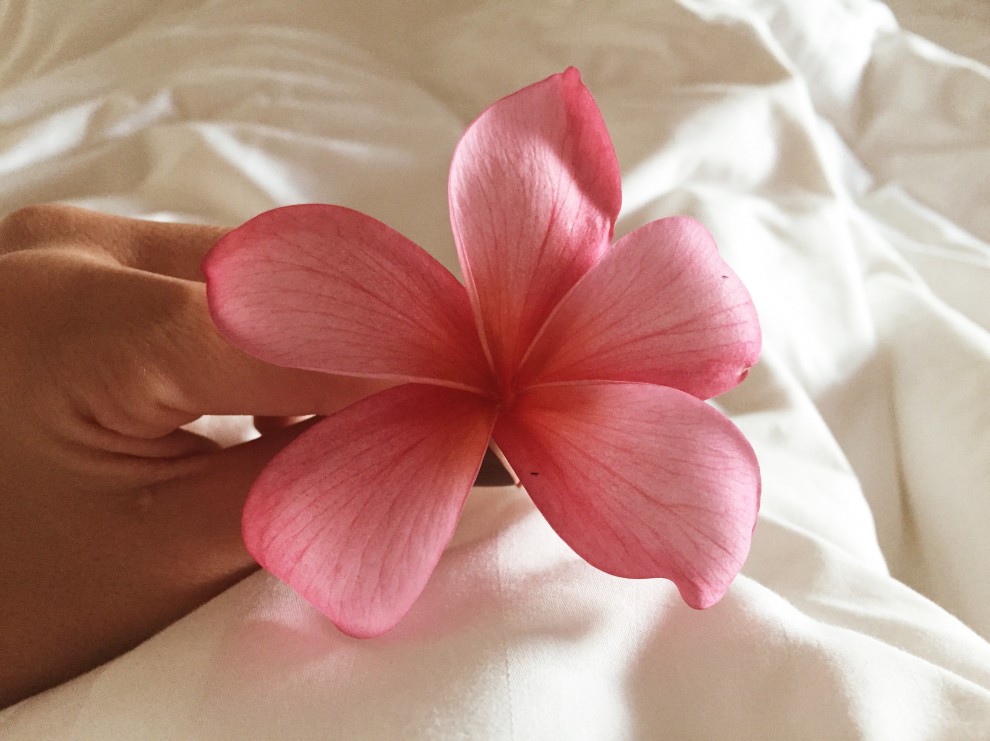 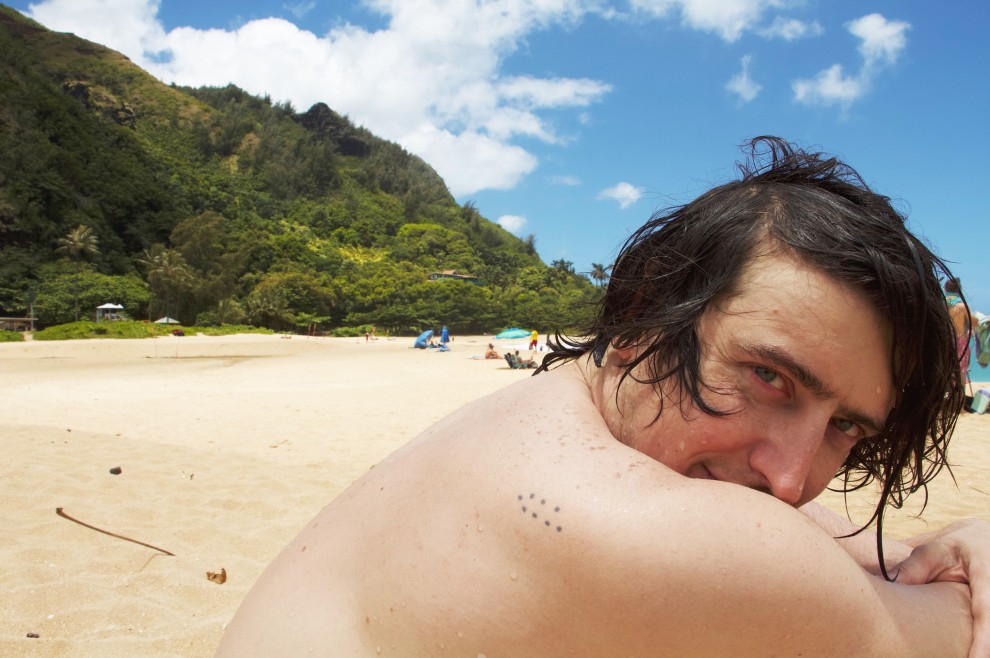 “What should the middle name be?” I asked Trey, shielding the sun from my eyes.
“I really love _____”, he responded…a name I had jokingly suggested a few days ago.
I turned back to look at the beach and said the full name out loud. I liked it too. It’s still hard to believe in just a few short months the little human will be here and there will be a face to that name.

This trip was just what we needed to relax, have some fun, and set our sights on the crazy adventure that’s ahead. 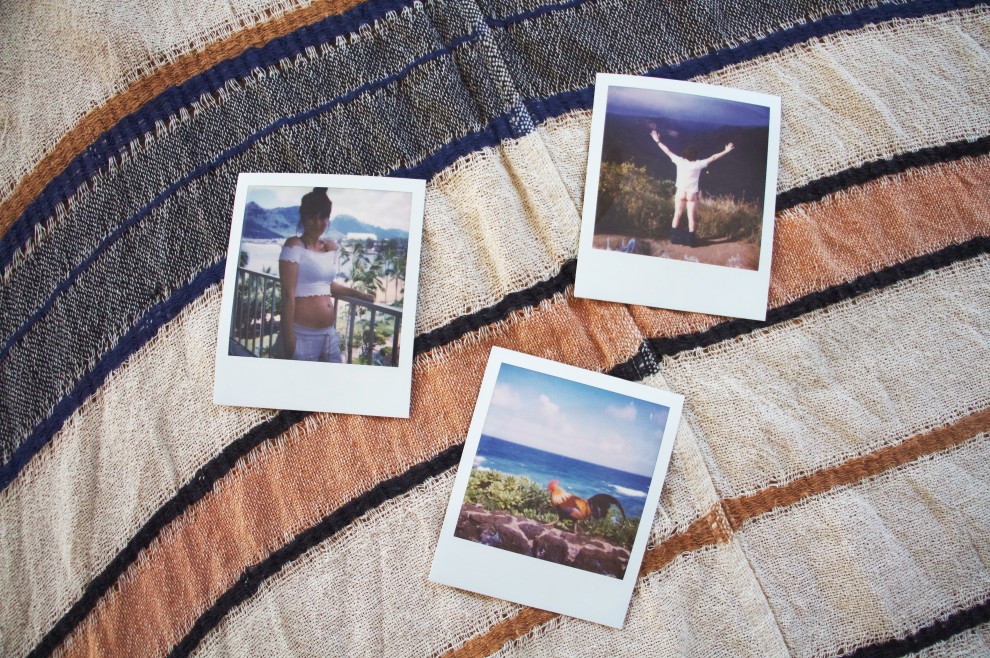 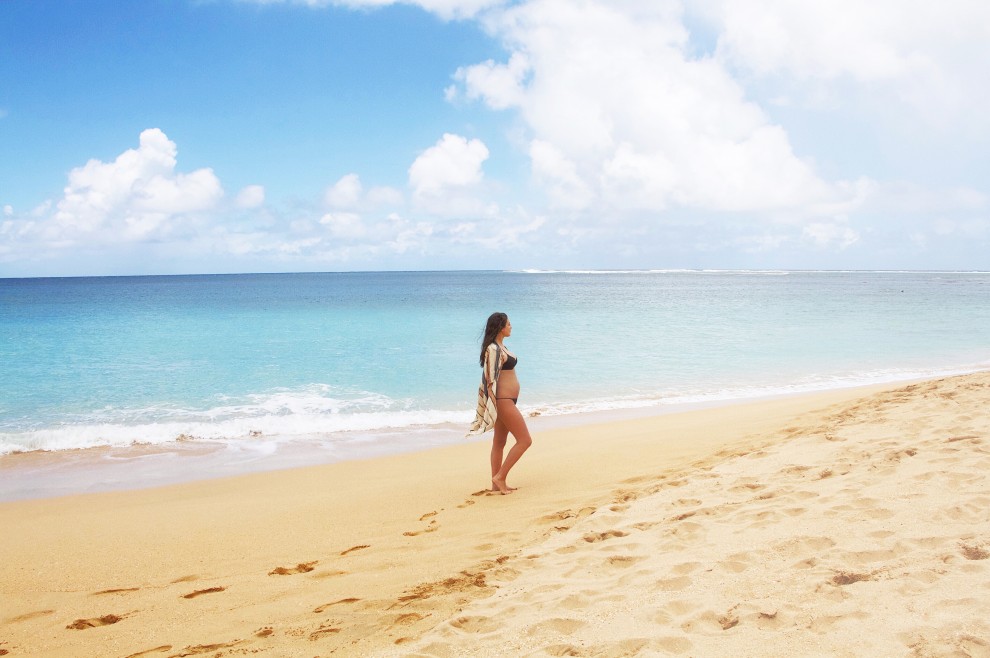 I also want to say a big thank you for all the sweet words and messages you guys have left on here, Facebook, Instagram and Reddit over the past few days. I read them all and we’re really excited for what’s to come.