If you’ve been following along, you know that on January 5th we went in for an embryo transfer via a 2nd round of IVF. After taking a home pregnancy test and it coming out negative 14 days after the transfer procedure, we went in to the IVF center for a blood test to confirm the results we were getting. A few hours later our nurse called to give us the results of that test.

It was positive. TREY AND I ARE GOING TO HAVE A LITTLE HUMAN.

It feels really good to say that! When I started documenting the process, I was already half way through the 2nd round of IVF. I didn’t know whether or not it would work and was anxious, which led me to open up about it here. Since I decided to go back and start from the beginning to tell the story, the timeline has been on a bit of a delay for anyone reading this. When we found out the test was positive, I decided to finish telling the story before announcing. I wanted other women going through IVF that were reading about my process to get the full story, and for others who have people in their life going through something similar to understand what the roller coaster of IVF is really like.

Since finding out, we’ve been overly cautious with the news. We both couldn’t really believe it at first. We knew the blood test would be more accurate, but thought we had waited long enough for the home pregnancy test to read. Coming off 3 years of failure and disappointment, we almost had to convince ourselves it was really happening. We kept reminding each other to take it one day at a time since we still had 12 weeks to go to get through the first trimester before the risks of miscarriage and other complications went down. We knew from past experiences not to celebrate things too quickly.

At 6 weeks, we went in for our first ultrasound to make sure the pregnancy was in the uterus and not ectopic (in one of the fallopian tubes). We learned that there was one embryo only, and that we wouldn’t be having twins. I was relieved, though we would have made it work with twins…one was awesome. One is perfect.

Being overly cautious and not celebrating too soon ended up being a good strategy for us. Like everything has been throughout this process, the first trimester was a bit rocky. I would describe my first trimester experience kind of like the feeling you get when you step off a roller coaster and it still feels like you’re on it for a few steps afterwards. Around 8 1/2 weeks, I woke up in the middle of the night and something felt off. I looked down to see blood everywhere. It was basically my worst nightmare. As if this whole process hadn’t been difficult enough, now we were afraid things were over before they really had any time to get started.

This led to an emergency ultrasound early in the morning that found I was having major subchorionic hemorrhaging in my uterus. They said there was a 50% chance we would lose him/her and to be prepared for that. Dr. Chet put me on bed rest for the rest of the first trimester and told me to only get out of bed to do my progesterone-in-oil injections and go to the bathroom. Those 3 1/2 weeks were torturous not knowing whether or not I was going to wake up and have it happen again. They told us that subchorionic hemorrhaging of this degree typically happens when there is a trauma from a fall, or car accident, but then sometimes there isn’t a real clear explanation for why it happens other times. The only thing we could think of was me possibly coughing too hard from a respiratory infection I had at the time, but that seemed unlikely.

A week later we went in for another ultrasound, this time to check for a heart beat. Going in, we had prepared ourselves for the worst possible outcome. We were prepared to be told that there wasn’t a heart beat. Laying there, looking at the small black and white blip on the ultrasound screen while Dr. Chet examined the fetus felt like forever. He looked at the hematomas (internal bruises) that had formed in my uterus. Because everything is so small and hard to discern at that stage, it was hard for Dr. Chet to tell for certain whether or not the placenta had detached from 3/4 of my uterus, or if the dark spots were hematomas that could heal. Then he turned on the audio to the ultrasound machine and the whooshing sound of a strong heartbeat came through followed by a flicker (the heart) on the screen. He or she was still alive in there, and doing well. The nurse joked that we might have a strong-willed baby in our future, since he or she was hanging in there. Trey later told me he almost passed out in the room because he was so nervous.

Gradually, the hematomas that had formed as a result of the hemorrhaging started to heal. We went in for weekly ultrasounds to check the healing progress. We were glad to learn that nothing had permanently detached, I just needed time to heal. By 13 weeks, Dr. Chet referred me over to a high-risk OBGYN and released me from his care because things were looking good. Our last visit with Dr. Chet and the nurses was a happy one. It had been a crazy ride, but I had gotten pregnant and made it through the first trimester. We thanked Dr. Chet, the nurses, and the staff for being so kind to us. We decided to keep the news to ourselves a little longer before telling anyone. At this point we barely acknowledged there was a baby. We referred to her or him as “the embryo”, and later, “the fetus”. Looking back, I think this was because both of us were afraid of getting attached and it not working out.

Since then, things have been great. I was downgraded from high-risk to a normal pregnancy and have completely healed from the early trauma experienced in the first trimester. I was given the OK to start swimming and exercising lightly. Once we survived the first trimester, things seemed to pass by pretty quickly. Around 15 weeks or so, I was taken off the intramuscular progesterone-in-oil injections because my progesterone levels were consistent. My energy increased and we felt comfortable sharing the news with family and close friends. We met with our new OB and had a fun genetic screening ultrasound where the tech made me skip (slowly) down the hall (the mama catwalk, as the techs there called it) to turn our kid because he or she wasn’t cooperating with getting their picture taken. Our OB and the doctor who looked at the genetic screening ultrasound results told us everything looked normal, and that if they hadn’t known about the hemorrhaging from the first trimester, they would have never even suspected a thing. It was reassuring to hear that. I’ve never been so happy to be considered NORMAL.

It’s taken a while, longer than most probably, for this to feel real. I don’t think you go from 3 years of failures and the anxiety of things not working out, to being overwhelmingly happy and confident in the success you’re having. It’s been a process. Learning to allow ourselves to let our guard down and feel the happiness and celebration that comes along with having a little human is something that has taken us some time.

Trey and I have experienced that process of letting our guard down differently. For me, it happened randomly on the treadmill at the gym a couple weeks ago. I was increasing the incline from 3 to 5 like I always do after the first 10 minutes. As the steepness got greater, I found myself quietly saying “hold on!”, then realized I wasn’t talking to myself. I was talking to the little human. It was the first time I had done so. I think a part of me felt like up until then if I acknowledged her or him that they’d go away. I couldn’t help but smile a big goofy smile while walking up the rest of that pretend hill.

For Trey, it happened on my birthday last month. He brought home Thai food from the city on his way home from work. After dinner, he gave me a bag with a couple gifts inside. One of the gifts was an octopus nightlight for the little human that when you turned it on projected the moon and stars on the ceiling. We turned off the lights and sat at the kitchen table with the night light on. It’s funny how little things like a treadmill and a night light can represent so much more. For us, it was the start of letting go of the anxiety and disappointment from the past few years, and the beginning of feeling the happiness and celebration for what’s to come.

This Friday, I’ll be 22 weeks. Which is 5 months and some change. It’s hard to believe we’re already over half way through seeing as though it wasn’t too long ago when we felt like it wasn’t going to happen for us. We just got back from a little babymoon in Kauai that was really relaxing and fun. We had pina coladas (virgin for me – they’re kinda better that way??), swam everyday in the waves, and rented a convertible (the were all out of jeeps) to drive around the island.

So. Currently, there is half a burrito, 3/4 a cup of yogurt, and 1 baby human inside my belly region. In September, Jack and Keep and Mila cat will have a new human friend around.

Two dogs, a cat, two big humans and one little human. I like the ring of that. Sounds good to me. 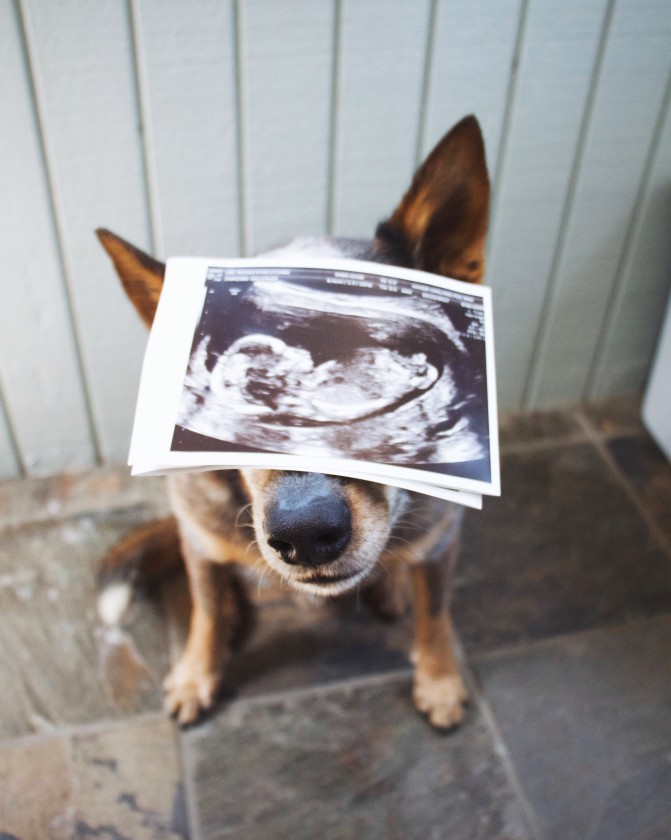