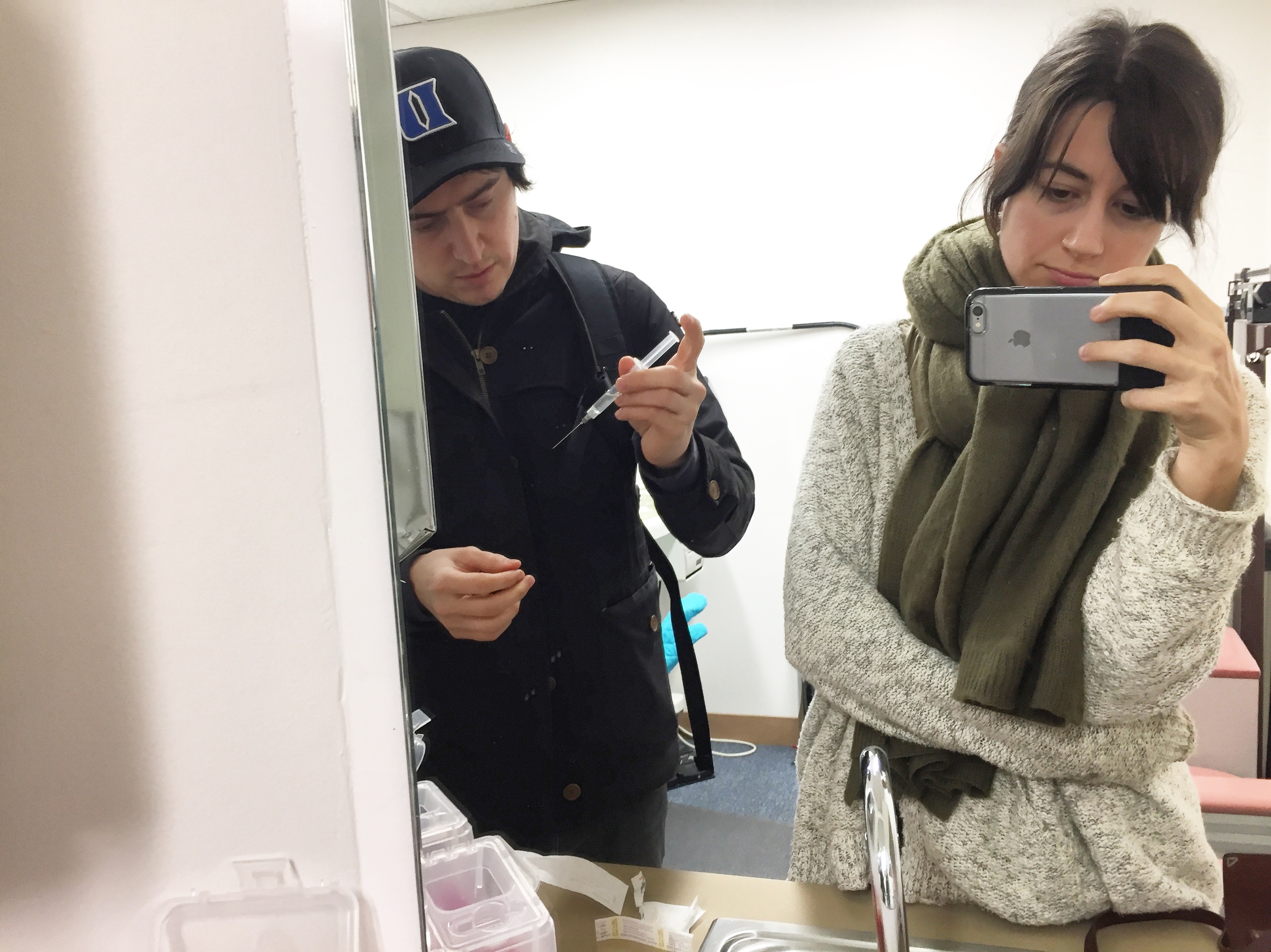 I’m not sure I was completely ready to do so when we did. I told everyone I was. Trey, Dr. Chet, my therapist, even myself – but on the inside I felt more like a zombie going through the motions, vaguely resembling something human on the outside. I was still bummed from the last time not working out, and I was hesitant to set us up for another let down.

We drove into the city on the morning of the egg retrieval surgery in early December. It was foggy and cold, a proper San Franciscan day. The office was on the top floor of a building off the Embarcadero, a street which sits right on the bay. The office had big windows that looked out at the bay and the boats docked off the pier with a great view of the Golden Gate bridge. I stood looking out for a while, too anxious to sit and flip through magazines. My life had changed so much in the past few years. On a day like today a few years ago I was out working in the Farallones marine sanctuary (an area of the Pacific beginning just outside the Golden Gate) when a pod of 50 or so huge, mottled Risso’s dolphins appeared out of the fog around our boat. Later that day we had a similar encounter with a pod of humpback whales lunge feeding. We were in rough water with 12 ft waves about 20 miles off the coast and the visibility wasn’t great but none of us wanted to call it a day. It was one of those days when you couldn’t feel the cold with all the adrenaline running through your body.

The nurse called my name, snapping me back to my current situation. She led us back, put an IV in my arm and an anesthesiologist came and spoke to me for a little while to make sure he got the anesthesia right while I signed the various medical history forms.

Once I was put under, the retrieval took less than 30 minutes and was successful. I asked Trey if he would recount this next part of this since it’s a bit embarrassing for me to do so myself.

Trey:
After just enough time to make a cup of tea and reach the
end of my Instagram feed, a nurse opened the door to the
waiting room to let me know I could come back in. As I
approached her she assured me that everything went absolutely
fine, but that “she was pretty emotional, like… crying a lot”

I came back to find Nicole red-faced, tears running down her
face, dazed but assuring me “I’m fine, I’m fine.” She couldn’t
really explain much of anything at this point, about why she
was upset, nor was she able to recall even going into the surgery
room, or why she had asked everyone involved in the procedure
for a hug afterwards. Everyone was really sweet to her.

Apparently Nicole can be *really* sweet to strangers too,
especially when you heavily sedate her.

So, anesthesia can make you do silly things. The anesthesiologist (who I also asked for a hug, apparently) told me afterwards that sometimes when you have pent up emotions they come out when you’re waking up from the anesthesia and your inhibitions are lowered. Made sense, this was an emotional process. So, 1 bag of teddy grams, a cup of apple juice, and many hugs later and we were ready to go home. Dr. Chet told me to get some rest and that he would be in contact with more information about the eggs that were retrieved soon.

Now that the eggs had been retrieved, they needed to go to the lab to be fertilized w/ Trey’s sperm and cultured out (grown) in a dish for 5 days before being biopsied for any genetic abnormalities and then frozen to await transfer.

The next day, Dr. Chet called to give us an update. He told us 14 eggs had been retrieved, which was a good number. But then he told us that only 7 of those eggs were mature, which was abnormal given my age and having been on heavy stimulation drugs for 14 days. He thought almost all, if not all, the eggs would have been mature. 50% of eggs not reaching maturation was a possible indication of why I was experiencing infertility in the first place, although the process would have to be repeated in the future to really know if that was the case. Over the next few days he called us several times to give us updates about the remaining 7 eggs and how they were faring.

Of the 7 fertilized eggs, only 4 were normal after genetic testing (meaning no chromosomal abnormalities) and made it to day 5 to be frozen. In a week, we had gone from 14 eggs down to 4.

By now, I had been off the stimulation medications for about a week. Going off the medications again wasn’t fun. Throwing your hormones into fifth gear and then slamming on the brakes does a host of weird things to your body. Hot flashes, acne, nausea, exhaustion, blurry vision, moodiness, you name it. It’s not a walk in the park.

Enter: this post, where I had it up to my eyeballs with infertility and decided to finally write about it.

One of the really sucky things about infertility is you never feel like you’re in control of anything – your body, getting pregnant, the process – all of it. And then with IVF, you turn yourself over to doctors and it very much feels like everything is out of your hands. Your hormones are being manipulated with drugs, you’re being poked and prodded with needles, vaginal ultrasounds, blood draws, IVs, put under anesthesia, etc.

We elected to know the genders. Dr. Chet called us when the lab confirmed them.

Had this have been a normal getting-pregnant experience, we wouldn’t have had a particularly strong preference over girl or boy. Either would have been a happy, random surprise. But, going into this we had a long time to think about whether or not we wanted to transfer in a boy embryo or a girl embryo. We knew IVF would allow us to know, and given the chance to choose, we both really wanted a boy.

The next time we spoke with Dr. Chet he told us that of the 4 embryos, 3 were female and 1 was male.

He asked us which embryo we wanted to transfer in and without any hesitation we told him, “the boy”. It made sense for us, there was only one male embryo. We had plenty of female embryos to keep frozen for the future if we wanted more kids. We were really excited. This was what we had been waiting for and everything was starting to feel like it was falling into place.

Dr. Chet told us he would instruct the lab and a few days later called to give us our embryo transfer date: January 5th, 2017.

The weeks leading up to the transfer were intense. It was end of December now and we were spending the holidays just the two of us since traveling with the medications seemed too difficult. I was on a lot of injections again, new ones this time to prep for the transfer. Plus, it’s not like you can be totally cavalier when you’re scheduled to go get a baby put inside you. Trey and I would lay in bed at night and talk about everything that was to come. Would the embryo transfer be successful? If it was, what would we name him? What would he be like? Would he look more like you (Trey) or me?

But then we’d remind ourselves to take things one day at a time.