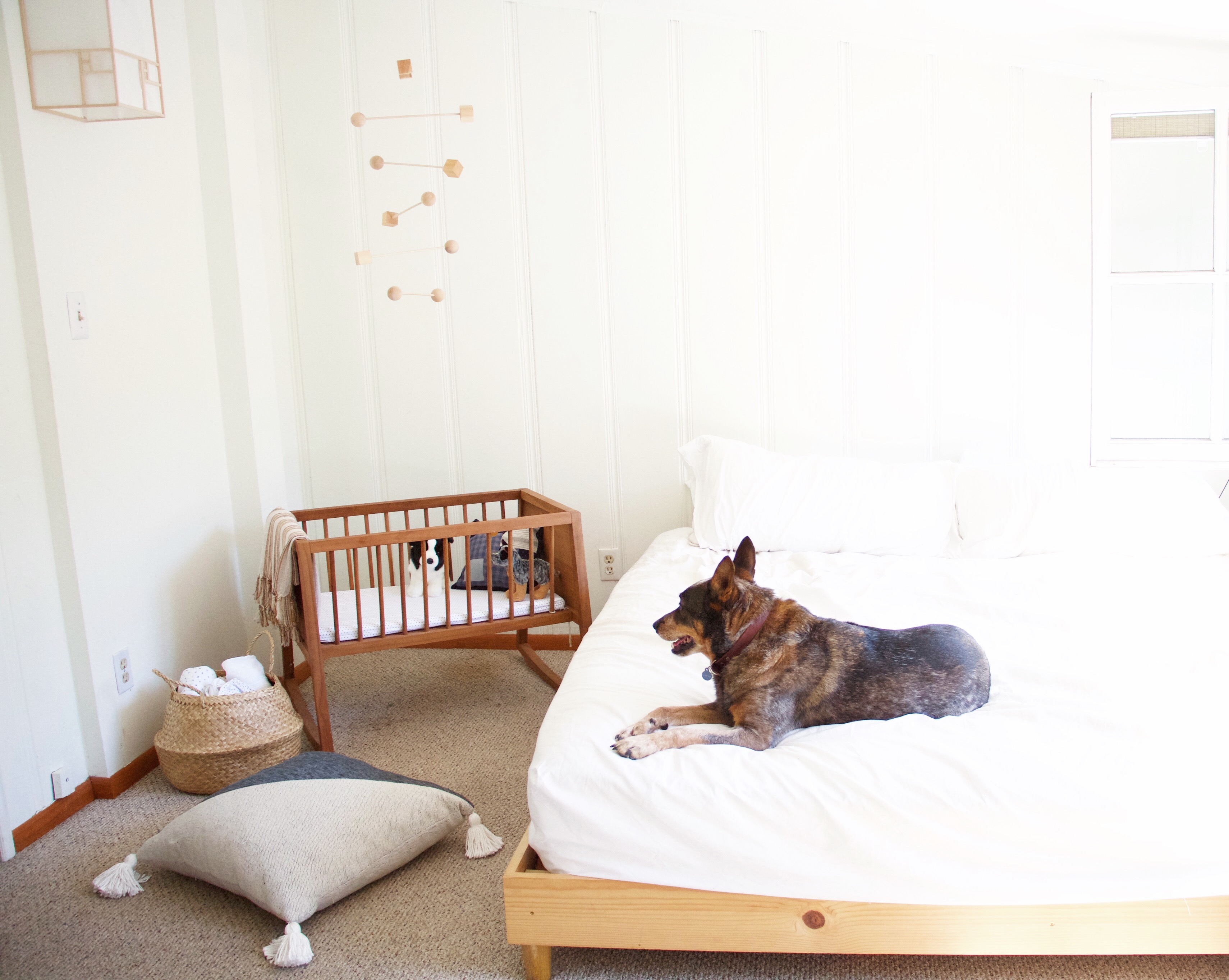 Sorry Swayze, we put baby in the corner. For the first few months at least, we’re going to have little human in our bedroom by my side of the bed. Eventually the operation will move to the nursery, but for now we’re all going to be roommies. I wanted to keep our bedroom clean and bright while bringing in some baby things that felt cozy and still allowed the room to work for all of us. Jack has already decided the floor pillow is his. I’m such a sucker.

To add storage, we brought in a dresser and added a changing mat on top. We mounted a tv and have wireless headphones for watching without disturbing little love. We’ve never had a tv in the bedroom, but I’m liking it. Watching the news in bed with a matcha latte in the morning is something I never knew I was missing out on until now. In the corner we put up a tiered woven hanging basket to hold bibs, coconut oil and other little necessities. Below that is an essential oil diffuser and night light. Right now I like to keep our room smelling like either lavender or eucalyptus since they are both calming scents.

The top dresser drawer below the changing mat is devoted to little human’s things. It has changing supplies, onesies, jammies, socks, tiny booties and mittens. The feetie pajamas always get me. That, and anything with ears.

For diapering, we’re trying out a trial of the popular compostable service offered in the Bay Area called EarthBaby that picks up soiled diapers from your doorstep and converts them into topsoil in 14 days, while also dropping off a new supply of diapers. Going into this, I thought any old biodegradable diaper was the way to go, but learned that unless you’re composting them yourself they actually have to go into the city trash bin (rather than the green city compost bin) because it’s human waste. Meaning, they go to the landfill like every other diaper and sit there. Granted the materials used are more natural and likely decompose at a faster rate, but, why buy biodegradable diapers if they aren’t going to be composted and biodegrade? Using less plastic while still having the convenience factor of a disposable is optimal for us. I’ll report back on how it goes. For wipes we’re using Water Wipes. They are made from 99.9% water, and .01% grapefruit seed extract. We went with this diaper pail and keep it next to the trash can in the kitchen.

I can’t say enough how much I love the wooden mini crib. It’s so pretty and I love that it rocks. Trey says he’s going to rig up something with the Arduino to make it rock on it’s own. I love his Honey I Shrunk The Kids ideas. He does this thing where I have something that breaks and he rushes to fix it, or I have a crazy idea and he comes up with a solution, then presents it to me saying (in my voice) “My Hero!”. I love him, I love him, I love him.

We also have a Snuggle Me for co-sleeping, though I’m not sure we’ll use it for sleeping at night since the dogs tend to sleep with us. We’ve been experimenting with shutting them out of the bedroom, but that doesn’t really work since they both know how to open doors. By morning they are both in the crooks of our legs. I tried putting a door wedge in the door (see photo below), but Keeper will try with all her might to open the door even with it in there…which can be loud. So yeah, we’ve created monsters. Don’t teach your dogs to open doors. Anyway, we’ll likely use the Snuggle Me nest during the day for naps on the couch since the bedroom gets really sunny in the afternoons and likely will be too bright for napping.

We made the wooden mobile above the crib using dowel rods, heavy duty fishing line, and different wooden shapes. I love how it turned out. When we have the windows open the breeze makes it spin in a slow, mesmerizing way.

The little patchwork pillow I made from scrap fabric I had laying around. The mini Jack and Keep toys are a favorite for obvious reasons. Beside the mini crib is a basket with cotton swaddles and extra mini crib sheets.

The little rocker chair is another piece I really love. It’s lightweight, making it easy for a little human to bounce themselves once they get to that arm and leg-flailing stage. I also like that you can move it from room to room. The rug we’ve had for a few years and just adds a little more comfort for tummy time shenanigans.

As for toys, we don’t have many at the moment. I have some in mind for Christmas. At this early of a stage though, simple rattles and shakers (and making funny faces) will do. Trey also brought home this little black and white dog lovie that I think is really cute!

I’m happy with how everything is coming together. With 9 days until my due date, it’s nice to cross “little human’s corner” off the list. We’re getting close. When I dropped Trey at the train this morning he told me “don’t go into labor, I need to rearrange the basement!” Like OK, I’ll try not to…!